Estate: The Tenuta San Guido property entered the Incisa della Rocchetta family holdings in 1930, when Mario Incisa della Rocchetta’s married Marchesa Clarice della Gherardesca. The property provided ample room for his extremely successful career in breeding thoroughbred racehorses, and for winemaking. The estate is named after Saint Guido della Gherardesca who lived during the 11th century. The 4,500-acre property [180 of which are vineyards] is located on the Tyrrhenian coast, between Leghorn and Grosseto, in Maremma, and stretches for 13 km from the sea up to the hills.

Hailed as “the standard-bearer of Italian enology”, the historic estate is known for crafting the legendary Sassicaia, the world’s first Super Tuscan and revolutionizing fine wine production in Tuscany. For the past 40 years, Mario’s son, Marchese Nicoló Incisa della Rochetta runs the estate, and now his daughter, Priscilla Incisa della Rocchetta has joined him in.

Named after Guidalberto della Gherardesca, a maternal ancestor of Nicoló Incisa who cultivated vines in Bolgheri in the 19th century, the estate introduced ‘Guidalberto’ in 2000. In addition to honoring his ancestor, Nicolò gives two reasons for its creation; “The desire to see what we could accomplish with Merlot, a grape that we had never used before; second, the desire to offer the consumer a wine which could be appreciated at a younger age compared to our veteran Sassicaia.” Indeed, the wine already has a reputation for being both easy drinking at a young age and having the ability to age significantly longer, if desired.

Winemaking: Hand harvested grapes are from soil rich in clay and stones, with areas of limestone, located between 100-300 meters in elevation, facing south/south-west. Fermented in temperature controlled stainless steel vats with indigenous yeasts. The maceration on the skins lasted 10 to 11 days for Merlot and lasted 10 to 14 days for Cabernet Sauvignon. It was followed by pump overs of the musts and délestages in order to soften the wine tannins. After malolactic fermentation the wine was aged 15 months in French and partially American oak barrels, by a few additional months in the bottle before release.

2015 Harvest Note from the Winery: In June and mid- July temperatures were above the seasonal average, but by the end of July the temperatures got lowered returning to the average thanks to a long rainy day, really good for the vines. Rains helped a lot avoiding any physiological stress for the vines and helping them growing the grapes favoring veraison. The good temperature range between day and night that occurred from late August helped an optimal phenolic ripeness of the grapes. Grapes were of an excellent quality, perfectly ripened, pretty cool and crisp. The great structure and the elegant, soft tannins are the main elements of this vintage.

Pairing Suggestions from the Winery: Traditional Italian dishes, such as zampone and lentils, also with Bolognese and other meat sauce pastas, grilled pork and beef, and roasts. Open it just before pouring, serve at 63-64 F [17 C]. 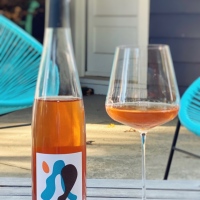