I was delighted to attend Benvenuto Brunello at Gotham Hall in NYC last month. Hosted by the Consorzio del Vino Brunello di Montalcino, the event was a celebration of the 50th anniversary of the Consorzio [founded in 1967] and the highly anticipated premiere of the 2011 vintage. As with other consorzio in Italy, its main goal is to protect quality and promote the area’s wines [today this includes identifying and eliminating imposter Brunello wines]. Nearly unheard of amongst the other Italian consortiums, every Brunello producer is a member of the consorzio [consortium].

Montalcino is in Tuscany, the central region of Italy and is bordered by the rivers Ombrone, Asso and Orcia. It is located 40 km from the sea and 100km from the Apennine Mountains and has a Mediterranean climate. Wine and olive oil have been crafted there for over 2000 years. Etruscan wine amphorae [clay jars], dating to the 4th century BC, along with numerous documented mentions regarding the wines of Montalcino from Medieval times on, testify to the continuous production in such an esteemed area.

Although it has the dimensions of a small square box, it is not a homogenous territory; the climate, soil and altitude all play a part in creating different terroir. Situated on a hill, the soils differ immensely from area to area, most drastically seen with loose soil at the lowest areas that increase in minerals as one goes higher up the hill. At one time many, many years ago the area was actually underwater; the soil is loaded with crushed marine sediment, especially marl [or mudstone, a clay soil with high amounts of calcium carbonate] and limestone.

Jeff Porter, acclaimed wine director for Mario Batali and Joseph Bastianich restaurants, [such as the renowned Del Posto, Babbo and Lupa], hosted the seminar portion of the event. A lot of attention has been directed towards the 2011 vintage, since it has the unfortunate fate of following the 2010 vintage, which has been deemed perfect by winemakers and drinkers across the board. The seminar wonderfully captured what 2011 was like, what is going on now in Brunello and what we have to look forward to. Below are my take away points:

• 2011 had extreme heat from mid July thru August, which increased sugar in the grapes and amplified rich fruit flavours. The cooler temperatures that followed have contributed a bright acidity to the vintage. [Recently Antonio Galloni of Vinous fame has noted “that 2011 was a year that already seems aged, with orange colors and flavors characteristic of already more advanced years in time”.]

• There is a movement towards sustainability and organic farming. There isn’t a lot of disease to fight, and producers are witnessing the multitude of advantages to environmentally conscious methods.

• When it comes to oak, people want to taste Brunello di Montalcino, so the pendulum is swinging back to more classical times, away from modern oak bombs. With a better understanding of various oak options such as: old vs new, types [French, Slavonian etc], and barrel sizes, producers are becoming more discerning with their use of oak.

• Brunello are known for their incredibly lengthy ageing capabilities, however this doesn’t mean they need to be cellared for 10 years in order to be enjoyed. Many producers stressed that they are drinking now, as aging is up to the individual, “don’t be dogmatic, it takes the fun out of wine”.

• And one of my favourites of the class: All Brunello are intended to go with food “they’re not cocktails”. 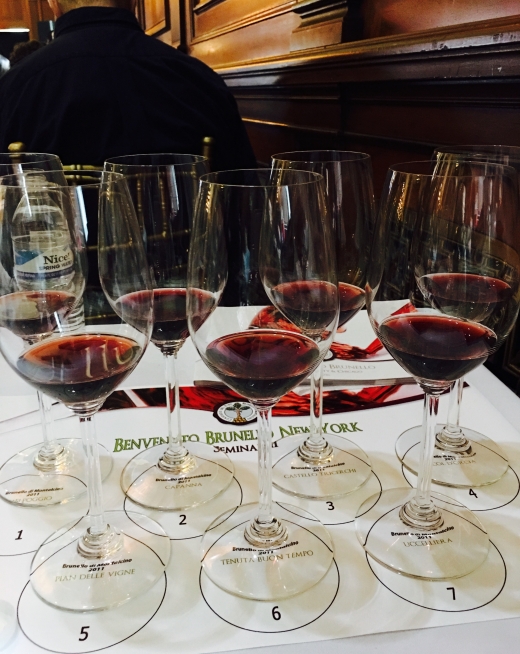 We tasted 7 wines that were introduced by either the winemaker or estate representative. Whilst all were fantastic, below are the ones that I found to be most engaging, the ones that even without proper food I could not put the glass down, and that had me craving for more. All are 100% Sangiovese, with an average online price of $50. 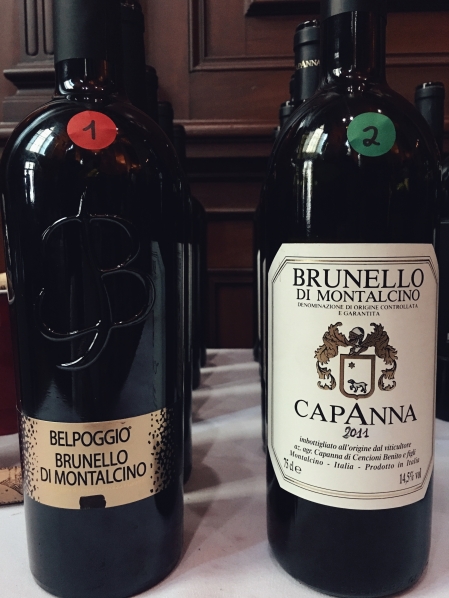 Bel Poggio Brunello di Montalcino DOCG 2011
A small production Brunello from an estate in the southern part of Montalcino, with only 5 hectares of vines and 2500 cases made. Aged for 3 years in Slavonian oak barrels, then “a slight amount” in French barriques at the very end. Elegant and traditional in character with dark berry and dark chocolate flavours as the star of each silky sip. Hints of baking spices linger on the dry finish. Fantastically easy drinking, Giuseppe Brasa, the winery’s representative states that while this can age, it is ready to be enjoyed now.
14.5% Alcohol

Capanna Brunello di Montalcino DOCG 2011
A lovely study in contrast to the succulent southern Brunello, the Capanna estate is in the northern part of Montalcino. Astoundingly vibrant cherry aromas and flavours abound, hints of strawberry make an appearance before traces of cigar box spice on the lengthy finish. Concentrated fruit flavours, yet overall this is lithe and sprightly in nature, disappearing from the glass rather swiftly.
14.5% Alcohol

Castello Tricerchi Brunello di Montalcino DOCG 2011
The Castello Tricerchi estate was founded in 1441, and as the name implies, they do have a castle. Located at the very top of Montalcino, the vineyards are northeast facing and receive hot winds blowing in from the south. Natural yeasts were used, and aging was for 42 months in Slavonian oak casks. Intense, with a genteel edge highlighting the silky smooth dark berry flavours and firm tannins. Campfire notes and hints of truffle linger enticingly between each sip. Fantastically smooth and easy drinking, oak notes take a backseat in comparison.
14% Alcohol

Uccelliera Brunello di Montalcino DOCG 2011
Uccelliera is one of my favourite estates; I find all of their wines to be wonderfully elegant and well balanced. The Brunello is warm and rich, with a core of concentrated dark fruit [black cherry, blackberry, plum] highlighted by soft spice and traces of oak. Fruit notes are maintained by desert dry finish on the lengthy, refined finish.
15% Alcohol 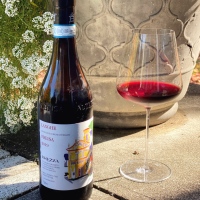 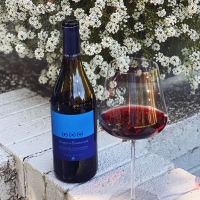 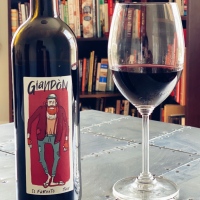 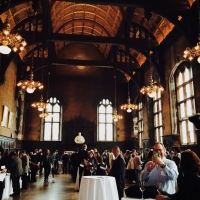 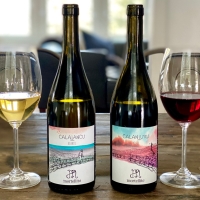